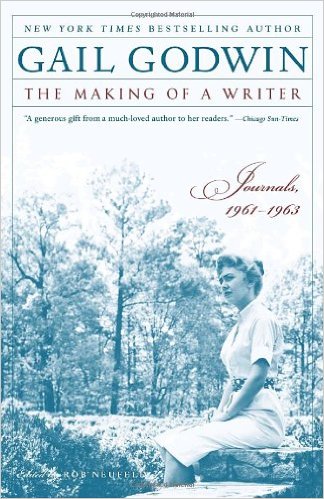 After the breakup of her first marriage and being fired from her job as a reporter for the Miami Herald, Godwin decides to devote herself to becoming a writer and moves to Europe -- first to Denmark then to London, with a glorious interlude in the Canary Islands. Godwin lived in London for two years working at the U.S. Travel Service by day and, during her free time, doggedly pursuing her writing often amid anxious self-doubt. Godwin kept a daily chronicle of this heady time in her life recording her impressions of new places, new people (new men – lots of them), her reactions to the books she was reading, and her struggles to create prose and find her voice as a writer.

The journals reveal the emergence of a brilliant writer as well as the exuberance of a young woman embracing life and her own ambitions. There is also an overriding sense of longing throughout the journals as Godwin grapples with her desire to be one of the world’s “masterful explainers,” which for her is what fiction writing is all about.

The Making of a Writer is a treasure trove of thoughts, ideas and emotions for any young writer and, for Godwin’s many fans, an unprecedented look at her writing process and at some of the people and scenes who would figure in later works.

“As a diarist myself I read Gail Godwin’s diary with complicity, pleasure, suspense, annoyance, competitiveness, astonishment and, yes, a touch of jealousy. She holds her own gorgeously. It’s writing about writing, from the inside out: what it means -- and takes -- to be a writer.”
--Ned Rorem

”[Godwin’s] entries show the ways in which a writer’s imagination began to shape the material of her life into what later became notable stories and novels; it’s remarkable, in fact, that someone who at 24 could write with such wit, perception and rueful self-knowledge would have to wait another half-dozen years before receiving any recognition for her gifts . . . it is good to know that this engaging volume is the first of a series.”
--Publishers Weekly (starred review)

“When Godwin decided to publish her journals, she enlisted the help of librarian and critic Rob Neufeld. Thanks to his generous footnotes and graceful scene setting, and the freshness of her emerging writer’s voice, the emotional and intellectual complexities of her adventures, and the blaze of her literary ambition, this is an exceptionally well-made and enjoyable volume . . . Strong, shrewd, funny, and literary to the core, young Godwin is good company, and her lively journal reveals much about the making of a writer.”
--Booklist (starred review)