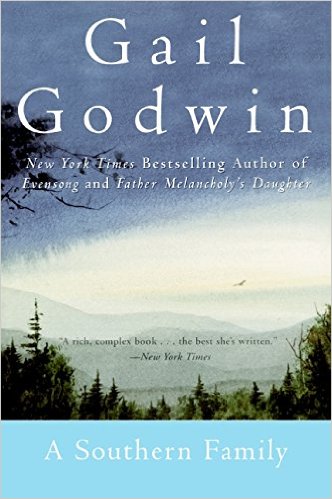 A Southern Family
A Novel

Gail Godwin's new novel is told in a multiplicity of voices; and what emerges is a profound and unforgettable portrait of a southern family for whom provocation has become a way of life.

"What's sad about our family is that we haven't been able to be ourselves. Every one of us has wasted too much time being ashamed of the wrong things."
--Theo Quick, elder son

Lying at the center of the novel are two violent and mysterious deaths, one of which is Theo's.

"If guns don't kill you, families will."
--Lily Quick, at her son Theo's funeral

The only member of the family who has been able to escape its regional, if not its emotional, clutches is Clare, Lily's daughter by a previous marriage. Now a successful writer in New York, in the aftermath of Theo's death she returns to the South with her European lover, Felix Rohr, to face her guilt at her neglect of Theo and, like the other members of her family, to confront the demons of self-doubt and hate that are her legacy from the past.

"Knowing your family has helped me to know the real America."
--Felix to Clare

Among the other things that Clare and Felix discover is the continued unraveling of Lily's marriage to Ralph Quick. The once-vibrant Lily has, over the years, grown into the kind of queenly southern woman she once despised; and Ralph's former passion has turned into a bitter indifference that has become an accepted part of his daily life.

"It's like one of those bad fairy tales, son, where you ask for your three wishes and get them, but then it all falls on your head. . . . I Wished for a wife I could admire, who would do me credit, and some children, and material success, and respect from the community. I got those things."
--Ralph Quick

Standing apart from the blood ties that bind the others are Snow Mullins Quick, Theo's estranged wife, and Julia Richardson Lowndes, Clare's friend from childhood; and it is they who provide the insightful words that define the family.

"It's like they are all acting in a play or something. Each one's got them self a part and they have to stay in that part as long as they're around the others."
--Snow

"Layer upon layer of debilitating resentments and intrigues . . . had sapped the family members of their individual strengths and yet bathed them, as a unit, in a certain sinister harm."
--Julia

A Southern Family is storytelling on a grand scale, rich with revelations of friendship, love, and the deep entanglements of family life. With it, Gail Godwin confirms her place among the masters of the contemporary American novel.

"A grandiloquent novel with a hundred special moments."
—Boston Globe

"Rewards you like a deeply felt talk with a well-loved friend."
—Glamour

"A remarkable novel...I don't think I will ever forget it."
—San Francisco Chronicle

...the best character study yet from the author of The Finishing School."
—Library Journal