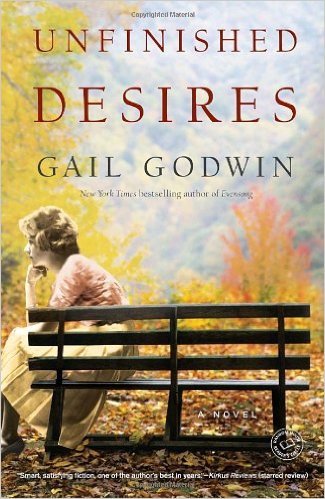 Set in a small town in the mountains of North Carolina, Unfinished Desires is a complex and deeply affecting story of friendship, loyalty, redemption, and memory.

The ninth grade class of Mount St. Gabriels, an all girls Catholic School, is strong willed (some might say "notorious"). Leading the pack is the unforgettable Tildy Stratton, the undisputed queen bee of the class, who quickly befriends Chloe Starnes, a day student recently taken in by her uncle following her young mother's mysterious death. The passionate friendship fills a void for each girl, and the headstrong Tildy soon has Chloe and the whole class enacting her vision for a play based on the colorful founding story of the school.

What happens the night of the play will profoundly affect the course of many of the lives involved, including that of the girls' teacher, a young nun, as well as the school's matriarch, Mother Suzanne Ravenel. Fifty years later, she will still relive that night in 1951, trying to reconcile past and present, and reaching back even further to her own senior year at Mt. St. Gabriel's, where the roots of a tragedy are buried.

"In the year 2001, elderly Mother Suzanne Ravenel tape-records her memories of her 50 years at Mount Saint Gabriel’s in the Appalachian mountains of North Carolina. Her worst memories are of the dreadful school year 1951-52, when a turbulent ninth grader provoked an outburst that resulted in the headmistress being sent on a leave of absence. Mother Ravenel’s own student years at Mount Saint Gabriel’s in the 1930s also figure in the story, as does her fraught friendship with Antonia Tilden. This being the South, the separate generations are connected by blood and grievances. Antonia’s orphaned niece Chloe is in that 1951-52 ninth-grade class, and she becomes best friends with manipulative, needy Tildy Stratton, daughter of Antonia’s embittered twin Cordelia, who’s convinced that Suzanne Ravenel’s pushiness led to Antonia abandoning her true vocation as a nun. Cordelia’s animosity and malice drive the plot, as Tildy takes up her mother’s vendetta against the admittedly bossy, self-righteous Mother Ravenel. Chloe’s kind Uncle Henry is the only male character of any significance; the emphasis is on female friendships, especially the adolescent variety, with its gusts of hormonal emotions and intricate maneuvers for position. Bad mothers get a good deal of attention as well (there are quite a few of them), and Godwin elicits our understanding for all her characters without letting them off the hook for bad behavior. She skillfully unfolds fascinatingly tangled motives as she keeps the action bustling along. Moving final scenes show an old nun realizing that mixed motives matter less than a lifetime of service, and two old friends reconnecting after 55 years, matured and seasoned by what they’ve endured, but not so very different from what they were at 14.

A strong story populated by a host of memorable characters—smart, satisfying fiction, one of the author’s best in years. "