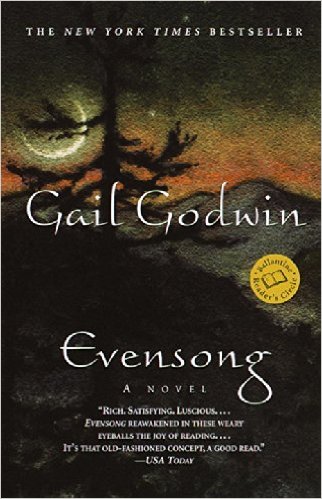 To read Gail Godwin is to touch the very core of human experience. With inimitable grace and aching emotional precision, this New York Times bestselling author and National Book Award nominee probes our own complexities in characters whose lives oscillate between success and struggle, stoic resolve and quixotic temptation, bitter disappointment and small, sacred joy. Now, in her first novel since The Good Husband, Godwin again translates our everyday existence into soul-touching truths as she brings to brilliantly realized life the people of a small Smoky Mountain town -- and a woman whose world is indelibly altered by them.

At the advent of the new millennium, the residents of High Balsam are in desperate need of hope. Economic and social unrest has led to tragedy. For Margaret Bonner, the young pastor of High Balsam's Episcopal church, care of the community is her constant challenge and devotion.

But now, into Margaret's well-ordered life, come three strangers -- a firebrand female evangelist with a haunted past; an elderly, itinerant man whose visit to this quiet hamlet may be no accident; and a troubled boy who Margaret's husband, headmaster of a progressive, local school, is determined to save. Soon these explosive personalities will ignite a conflagration in Margaret's marriage and in the depths of her very soul.

Raising profound issues of love, commitment, and the ever-changing landscape of family, Evensong is both graceful and gripping in its story of a marriage struggling to sustain the best of itself in a volatile world. With this engrossing new novel, one of our most gifted and accomplished storytellers gives us an unforgettable portrait of an American town at the century's end -- and of the unexpected events that forever shape our lives.

"Rich. Satisfying. Luscious . . . Evensong reawakened in these weary eyeballs the joy of reading. . . . It's that old-fashioned concept, a good read."
--USA Today

"A DEEPLY CONSIDERED, EVEN DIGNIFIED NOVEL . . . One stays engaged with the story for sheer narrative hook: As with story lines from Dickens . . . you simply want to find out who does what to whom. . . . The final beauty of Evensong is its ability to address God--to address the mystery of faith by comprehending, then embracing, this premise of uncertainty itself."
--The Boston Sunday Globe

"EVENSONG LINGERS IN THE MIND. . . . Meticulousness and precision are, indeed, Godwin's greatest strengths. In matters liturgical and clerical, her command is impeccable."
--The New York Times Book Review

"[A] SENSITIVE, PERFECTLY PACED NOVEL . . . A story full of fresh, spiritual wisdom . . . Smashing one of the strangest taboos in American literature, Godwin may have finally brought religion back from the wilderness and made it a safe subject for literary fiction."
--The Christian Science Monitor

"[A] RICH NEW NOVEL . . . with the narrative verve and moral gravity that made earlier novels of hers so appealing."
--Christopher Lehmann-Haupt, The New York Times