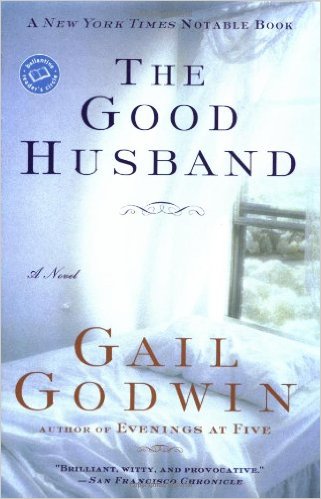 The Good Husband
A Novel

"Mates are not always matches, and matches are not always mates," pronounces Magda Danvers, the magnificent central figure in Gail Godwin's wise and affecting new novel. With The Good Husband, one of America's most gifted novelists creates a portrait of two marriages and four unforgettable characters that travels beyond the usual questions of love and domestic comfort to explore the most profound consequences of intimate relationships. It is also, in its deepest sense, a novel about how we influence and transform -- and sometimes complete -- one another.

As a young woman, brilliant, charismatic, and eternally curious, Marsha Danziger transformed herself into Magda Danvers, taking the academic world by storm with her controversial treatise on visionaries, The Book of Hell. She was already a star when she came upon Francis Lake in a Midwestern  seminary and married him, to everyone's surprise, including their own. It was a mating that seemed perfect: Magda pursued her career, and attentive, caring Francis devoted himself to Magda. Now, Magda's grave illness puts their marriage to its ultimate test.

Even as she faces her "Final Examination," Magda's genius does not desert her. From her bed she continues to arouse her visitors with compelling thoughts and questions, which will change the lives of some of them. Into the heady atmosphere of Magda's provocative repartee comes Alice Henry, fresh from her own family tragedy. Magda's room soon becomes a refuge for Alice from her crumbling marriage to brooding Southern novelist Hugo Henry.

But is it the incandescence of Magda's ideas that draws Alice, or the secret of "the good marriage" that she is desperate to discover? For Alice, Hugo, Francis, and Magda will learn that the most ideal relationship -- even a perfect marriage -- doesn't come without a price.

Gracefully written, keenly insightful, intimate in its revelations, The Good Husband reverberates with the lives of its characters, their histories, and the most urgent longings of their hearts -- a triumph of the novelist's art, from the author of A Mother and Two Daughters, The Finishing School, A Southern Family, and Father Melancholy's Daughter, all of which were New York Times bestsellers.

...this subtle, moving meditation on the nature of intimacy and influence, and the differences between good matches and good mates, will have wide appeal.
—Booklist

Two oddly mismatched married couples are the focus of Godwin's (Father Melancholy's Daughter, LJ 2/1/91) powerful new novel. Magda Danvers, once a brilliant literary theorist, now a dying professor at a small private college, is married to "good husband" and former seminarian Francis Lake. "Frannie" devotedly attends to his beloved, impatient older wife while she is dying. Watching this with wonder is Alice, young wife of famous novelist Hugo, who is also teaching at the college. After a botched home birth, Alice and Hugo's baby has died, and their grief has sent the marriage into a frosty decline. Godwin's intensely drawn characters are vividly portrayed during the most intimate times of love, marriage, and death. The result is a winner.
—Library Journal

"COMPELLING WRITING...REMARKABLY SKILLFUL...Gail Godwin shows herself to be at the height of her considerable power as a storyteller and a writer."
—The Boston Globe

"ONE OF HER FINEST BOOKS...It is not only a well-written story, but a mature and wise one, affirmative in its vision of love, unblinking in its portrayal of tragic loss."
—Atlanta Journal & Constitution

"A BRILLIANTLY CRAFTED NOVEL, full of fun and mischief and resonating with wisdom and moral depth."
—New Woman