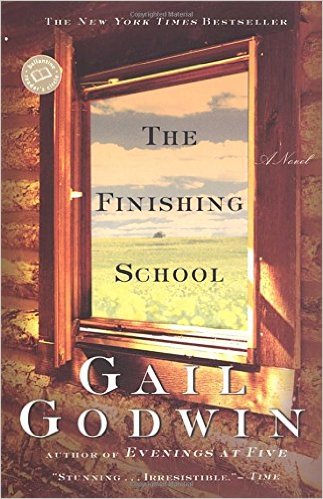 The Finishing School
A Novel

Last night I dreamed of Ursula DeVane. We were sitting on the crumbling threshold of The Finishing School, and she was telling me something in her rich and compelling voice. Then, suddenly, the sky turned an ominous color, the pond shivered like a live thing, the old pines hissed and swayed, and hard rain pelted down.

"Let's make a run for it!" said Ursula, tensing her body for the dash.

"Ah, Justin," she said, putting her arm around my shoulders and giving me a shake. "Haven't I taught you anything? Didn't you learn anything from me?"

She leapt up and hurled herself boldly into the storm. Lightning cracked all around her. She was wet to the skin before she had even reached the far side of the pond. I huddled in the shelter of The Finishing School and watched with mounting despair as her figure grew smaller and dimmer in the downpour. I knew if I did not jump up and run after her now that I would lose her forever. But I was powerless to move.

When I woke, I could still feel the pressure of her touch on my shoulders. I could hear the pitch of her tender, teasing voice. All day I have gone around under the spell of that dream.

Is it the dream that has its hold on me, or is it Ursula herself, after all these years? In the dream we were the same age, both young girls; yet when I knew Ursula, that single summer, she was a woman of forty-four and I had just turned fourteen.

All day I have wondered whether I would want to see the real Ursula again, even if I knew where to find her. She would be seventy this year, if she is still alive. How would I feel about her now? Would she be very changed? Or would she, regardless of age and of the hardships she may have suffered since that summer's end, still retain the power to bewitch my imagination? Would her voice still enchant with its melody and its challenge? How would she feel about me? Would she be glad to see me, or would what happened at the end of the summer have eclipsed our friendship and made her bitter and angry? If I were to see her again, what would I say?

(Ursula, which were the true parts and which parts did you make up? Do you know, I am still trying to sort out which was which?

You'll be gratified to hear -- at least, I hope you will -- that I did choose a life in the arts. "Your soul craves that constant heightening of reality only art can give," you told me one afternoon, down at the old stone hut by the pond, which you called my "Finishing School," where you enthralled me with tales of your past and planted aspirations in me.

I'm sorry for the way I behaved at the end. The older I get, the more cruel that behavior seems. Yet, at the time, I was unable to behave any other way.

If you hadn't materialized that summer, I would have had to invent someone like you. If I hadn't come along, whom would you have invented? A girl like me? Or would just any gullible audience have served your purpose?

For what it's worth, you left your mark on me. Despite everything that happened, I have absorbed you. As long as I live, you live in me. Sometimes I hear myself speak in your voice. And, as you did, I watch its effects on others.)

I am a great respecter of dreams. Many turning points in my life have been heralded by dreams. A few have actually occurred in dreams. I believe that dreams transport us through the undersides of our days, and that if we wish to become acquainted with the dark side of what we are, the signposts are there, waiting for us to translate them. Dreams say what they mean, but they don't say it in daytime language.

A friend tells me she dreams regularly of a girl named Megan, whom she hated in grammar school. But over the years, in these dreams, Megan has grown up along with my friend, and they have become important to each other. My friend says she actually looks forward to her Megan dreams. In these dreams, after an initial animosity, the two get together and reveal how they have always secretly admired each other and wanted to be friends. Each shows striking insights into the other's nature and confides to her what strengths she has been jealous of all these years. The two of them discover they are opposites of the same self.

"But what about the real Megan?" I asked her. "Have you ever tried to get in touch with her again?"

"Good heavens, no." My friend laughed. "I'm sure she grew up to be a horrible person."

Which is to say: I won't hire a detective to go in search of a real seventy-year-old woman, who might still be found. (And who, perhaps, would retain her power to shatter or elude all my ideas of the kind of seventy-year-old woman she might have become, just as, during that summer, she was never as I expected her to be, from visit to visit.) But I will attend to what her image, playing its role in last night's dream, came to tell me. This is not the first time I have dreamed of Ursula DeVane. I dreamed of her on the night of the day I met her, and many times since. I will probably be dreaming about her for the rest of my life. She, along with a few others, has claimed a permanent place in the theater of my unconscious, where each figure -- based wholly or in part on some real person -- has its function.

When Ursula appears in a dream, it is usually to stir things up.

"There are two kinds of people," she once decreed to me emphatically. "One kind, you can tell just by looking at them at what point they congealed into their final selves. It might be a very nice self, but you know you can expect no more surprises from it. Whereas, the other kind keep moving, changing. With these people, you can never say, 'X stops here,' or, 'Now I know all there is to know about Y.' That doesn't mean they're unstable. Ah, no, far from it. They are fluid. They keep moving forward and making new trysts with life, and the motion of it keeps them young. In my opinion, they are the only people who are still alive. You must be constantly on your guard, Justin, against congealing. Don't be lulled by your youth. Though middle age is the traditional danger point, I suspect that many a fourteen-year-old has congealed during the long history of this world. If you ever feel it coming, you must do something quickly. . . ."

Over the years, her vivid figure of speech has stayed in my mind. "Am I congealing?" I ask myself. "Am I getting stuck in a role, repeating myself?" Or I will think, Poor So-and-So has congealed, gathering his same old themes around him like a shroud and being content to embroider them. I wonder if he knows it.

What would I be like if I congealed? Would I know it? Would I go on doing my work? Would others know?

The Ursulas of the world would.

"It's too bad about Justin," I can hear her say, launching into that musical tone she used when taking apart people's characters or summing up their fates. "When I knew Justin, she was just a young girl with large, questing eyes and very brown legs from riding her bicycle away from a house that was boring her to death. She was new to our village; she was disoriented. She had lost all the props that defined her. At the time we met, she saw herself as the victim of Tragedy: in a relatively short period, she had lost the grandparents who raised her, her father, and then her home. That is a lot to lose, of course, but hardly Tragedy to someone like myself, whose family contretemps would have kept Sophocles and Ibsen scribbling around the clock if they'd lived in our neighborhood. No, there are things much more tragic than the deaths of pleasant, unexceptional people and having to start all over in a new place.

"The girl's situation interested me, however. I have always been drawn to stories in which people have to start over. I saw immediately that, for all her sadness and disorientation, this girl was determined to escape the ordinary and had the intelligence to see that I was her best bet in the village. So you might say I was initially flattered by her recognition -- one is taught by experience to put a premium on those few people who can appreciate you for what you are -- and then I grew fonder of her as the summer progressed. There was a sweet, old-fashioned gravity about her, unlike most young people, she listened well. I loved to watch her face as she listened, and also when she struggled to articulate her thoughts. She was not as eloquent as she wanted to be, but she was better than she knew. I did what I could for her: fed her mind and stoked her desire for the larger life. If she hadn't burst in on me that summer, who else could have done it for her? Yes, I take my share of the credit for what she has become. Not that she ever thanked me for it. And she was very cruel at the last.

"I'm sorry, all the same, that she is in danger of congealing. She doesn't know where I am, but I've kept up with my old protégée, and I'm sad to say she shows signs of falling into complacency, that alarming early warning signal of congealment. She's done well, of course, but to reach the range and intensity I have seen others capable of, she must tap new sources of feeling. Or old sources which she turned away from at the end of that summer, when she was afraid and confused. Ah, Justin, if you were to come riding over to me again, I would stir up your blood. 'Don't you recall,' I would say, 'how I warned you to be alert for the first signs of jellification? How you must fight, the moment you feel its clammy grip. You must hurl yourself into action, take some new risk. Remember my ancestors, the Sires DeVeine; how, every spring, when the snows melted, they roused themselves from the snug stronghold of all their old trophies and triumphs and rode boldly down the Jura Pass looking for trouble?

"'When did you last leave your stronghold, Justin? When was the last time you went out alone, forsaking all the props that have come to define you?"

Fourteen. Be fourteen again. Is that possible? Can I ride back into the country of youth, even on the conveyance of memory, propelled by imagination?

It was a long time ago. I was such a different person. What connection is there between the woman I am now and that lost, diffident girl pedaling up the steepest part of Old Clove Road, silently bargaining with herself, If I can reach the top of the hill without getting off my bike, something will happen, something will change . . . ? Well, right there is a connection. I still make superstitious bargains with myself. Only now I usually bargain for something specific. I have come to know, perhaps too well, what I want. On that May afternoon, I wished only for something interesting enough to rescue me from my present life.