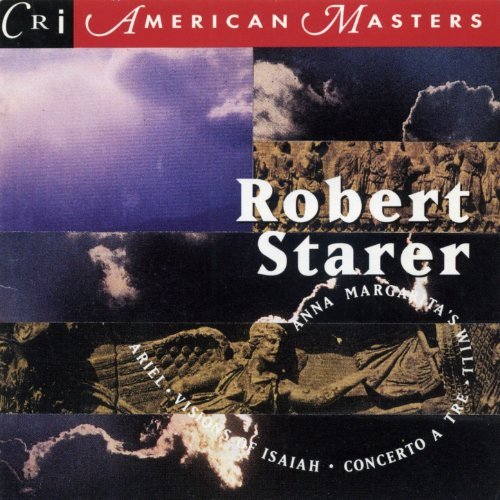 Anna Margarita's Will (text by Gail Godwin) for Soprano, Flute, Horn, Cello and Piano was composed in 1979 and recorded by CRI under a grant from the American Academy and Institute of Arts and Letters in 1980.

Anna Margarita's Will may be considered a dramatic monologue or a continuous song-cycle. Anna, a woman of wealth, not old yet, has decided to make her will, since she has no natural heirs except her frivolous cousin Loulie in Alabama. She speaks of people, dead and alive, who have shaped her. She reads from her mother's diary, quotes her father, who gave her courage and nerve, and remembers Sister Ursula who sat with her the night her father died. In a less somber mood she imagines what would happen if she left her house to a married lover, what his wife would say when she opens the letter. She speaks of her college love who often said: "Drink deep, Anna Magarita, or don't drink at all," and cousin Loulie, who would say: "What good to me is a house in the north, with all that snow and all that crime?" Having disposed of all her possessions in fantasy and having said a last farewell to her dearest ghosts, she discovers to her surprise that she is ready to begin life anew.

Anna Margarita's Will is Robert Starer's fourth collaboration with Gail Godwin. The others are The Last Lover (Caramoor Festival 1975), Journals of Songmaker (Pittsburgh Symphony under William Steinberg 1976), Apollonia(Minnesota Opera 1979). Their most recent collaboration is Remembering Felix (Chamber Music PLUS 1987). Gail Godwin is the author of eight novels and two collections of short stories.

Anna Margarita's Will
by Gail Godwin

I, Anna Margarita Wells, of seventeen Schoonmaker Lane, hereby make my will and testament. I am not about to die. I am not even old, yet; I am, as they say, of sound body and mind. I don't have any children; nor brothers and sisters. And since I do have property, some acquired and much inherited, I am troubled by the thought that it would all go to my cousin Loulie in Alabama who does not need it and would feel more inconvenienced than grateful.

Often lately, at the sunset hour, I look out at the hills tinctured orange with the fading light and I call up the people in my life to whom I would like to leave something of myself, people who have given me what can never be returned.

Some of those who gave the most are already gone. I scarcely remember my mother who gave me life, the most precious gift of all. She left me a box of photographs chronicling her beauty and a diary in which she wrote in purple ink:

He came. He loved. He married her. She died anyway.

"Go at your fences straight, girl.
Don't slow down, once you've started.
Look up. That's right, never look down.
And when it comes time for the leap, go forward to meet it. And never flinch."

The night my father died, Sister Ursula sat at my bed all night. The other nuns filed in, one by one.

"Remember you still have God," they chanted, each in turn.

"Remember you still have me," Sister Ursula said and stroked my head. She is still alive but there is nothing I may leave her; her vocation precludes possessions.

It would be fun, and wicked, to leave Rudolf a thing or two. His wife would open the letter:

No, dear lady, but I know you. Many is the time I've driven by your house at night and seethed at the two of you in there, sitting on top of all your history. You, unaware of your husband's forays into "timelessness," as he put it, with me. It would be fun to leave you a valuable house, on the condition that you live in it and see things from my side.

And Franklin, my college love, with his rich eloquent voice and dangerously high ideals. He walked me up and down the botanical gardens.

"Drink deep, Anna Margarita.
Drink deep, or don't drink at all.
Refuse to accept anything less than your best self."

But at age forty Franklin had drunk so deep he reached the bottom of the well, where he saw his own reflection. It was the reflection of a second-best self. He went to the corner bar, bought everyone a drink and announced.

went to his room and took his life. Poor Franklin, you would not have been consoled by my mundane bequests.

Who then? Who among the living would welcome a legacy from Anna Margarita Wells?

Small bequests are easy: My library to John who lives in books. My paintings to Natalie, who loves them for themselves; not to Clare, who covets them as an investment. My boat to Jeremy, on the condition that, for once in his life, he'll sail someplace he's never dared to go. My harpsichord to Nicholas; my cat to Andre, on the condition she will not alter him.

That still leaves Cousin Loulie with the bulk of everything. I can hear her now:

"Oh, Lordie, look at what Cousin Anna's done. Cousin Anna's left me her estate. That's sweet of her, but really, that emerald necklace would have been enough. What good to me are houses in the North, with all that snow and all that crime? I'm touched, of course, but really, that emerald necklace would have been enough. Poor Cousin Anna, sitting up there through those cold, lonely winters with all her ghosts. Poor Cousin Anna. I had the news of her passing just when I got back from my world cruise. In Leningrad I cut off a man's necktie in a restaurant. "It's much too wide for fashion," I said; "waiter, bring the scissors. "I almost died laughing."

That's enough now, Loulie is right: I've lived too long with ghosts, with those who are no more, with things that did not come to pass.

But while there is still light left, and there is some, yet, I will go down to the stream and plant a willow tree, in hopes of all that still might be, so I can watch it grow while I live.